Identification of Resettled PAPs for Development of Zone A and B

Under the policy of development of Thilawa SEZ, Myanmar government issued three official notices to people residing and/or cultivating land inside Thilawa Special Economic Zone（TSEZ）of Zone A and B between August 2012 and January 2013.

In February 2013, consultation meetings were initiated with potentially affected persons. In April 2013, work commenced on a Socio-Economic Census (Census) in the SEZ area, followed by a Detailed Measurement Survey (DMS) from June 2013. From those surveys, data such as construction structure, cultivation area of Project Affected Peoples (PAPs) and socio-economic situation of PAPs were identified.

Background of Resettlement from Zone A

Prior to physical development, land inside TSEZ including Zone A development area was acquired by the Yangon Region Department of Human Settlement and Housing Development (DHSHD) in 1997, in accordance with the Land Acquisition Act 1894. Myanmar government compensated the land users at the time.

In November 2013, Resettlement Work Plan (RWP) for Zone A was completed and disclosed by Myanmar government, with the technical support of JICA Expert Team, funded by JICA. The resettlement and IRP undertaken for Zone A is Myanmar government’s first experience of managing such programs with both private and public partners and investors. RWP was developed based on the meeting with relevant Myanmar government as well as the JICA Guidelines for Environmental and Social Considerations and the World Bank Safeguard Policy on Involuntary Resettlement (OP4.12).

As well as the implementation stage, it was considered for PAPs to secure the requirements of  the guidelines.

Overview of Resettlement under Development of Zone A and B

consideration on the social and economic impact of resettlement and those are formulated based on the JICA’s Guidelines for environmental and social considerations and the World Bank’s environment and social safeguard policy.

Implementation of the resettlement began in November 2013 when the first resettlement occurred in the TSEZ by the development of Zone A. Then, resettlement of PAPs in Zone B began after January 2017 when related RWP was approved by Yangon Region Government.

In both resettlement of Zone A and B, the substitute plots and houses were provided to PAPs in the resettlement site.

Resettlement of PAPs under Zone A Development

In total 81 PAHs (Project Affected Households), comprising a total of 382 PAPs, were relocated from the development area of Zone A. 68 PAHs were physically relocated to a specially constructed Resettlement Site (RS), which located nearby the Thilawa SEZ.

Substitute houses at the RS or given funds equivalent to the cost of house construction were provided those who preferred to build their own house at the RS. Each household was able to use materials from their previous house in the construction of their new house. If the floor area of a substitute house provided at the RS was smaller than a PAP’s existing house, the PAP was compensated with assistance equal to the current market price of materials for the difference in floor area.

Resettlement of PAPs under Zone B Development

Since Myanmar Japan Thilawa Development (MJTD) has developed Zone B by phase by phase, resettlement of PAPs from  Zone B is being implemented occasionally based on the RWP which are made for construction area in Zone B.

Firstly, PAPs of first RWP area of Zone B attended the public consultation meetings starts. Reflecting the result of consultation between Myanmar Government and PAPs/PAHs, following options for resettlement are proposed to PAPs basically:

As for option (1), RS and necessary infrastructure is provided near the project area in order to keep the similar living and social conditions, which is decided as per consultation with applicable PAHs. In principle, provision of the RS is prioritized since in-kind assistance is encouraged rather than cash assistance in terms of PAHs’ better livelihood restoration as per the international practice. As for option (2), this is accepted as special arrangement by Myanmar Government. In case PAH has a special and considerable reason (e.g. preference to live near other remaining family, relative or community members or to live near the remaining farm land) and requests self-relocation to another location besides the RS, such a request by a PAH is carefully considered by the township level committee of the RIC and reported to and concurred by YRG. After submission of the adequate supporting documents/evidences to purchase a land plot and construct a house on the land plot, the cash assistance which is equivalent to a land plot in the RS is provided to respective PAHs.

As of December 2020, the following number of PAHs are resettled into RS.

RS is located in Myaing Tharyar Ward 3 in Nyaing Wine Village Tract, Kyauktan Township near the Bant Bway Kon Dam. The site is on land purchased by the DHSHD.

The RS has mainly two residential areas for PAHs by Zone A and B.

The development for residential area of Zone A PAHs started with house and infrastructure construction in November 2013 and continued until March 2014. The total area for the RS is approximately 3 acres and a total of 68 residential plots were developed.

The RS is designed to have a concrete access road, six water wells, drainage and electricity provided at each house with electricity meters also installed. Community centers which are available by each Zone A and B PAHs also exist inside the RS.

In the distance close to the RS, various social infrastructures (e.g. school, health center, administrative office, monastery, and pagoda) are available mainly along the Thanlyin- Kyauktan road as shown in the figure and table below. 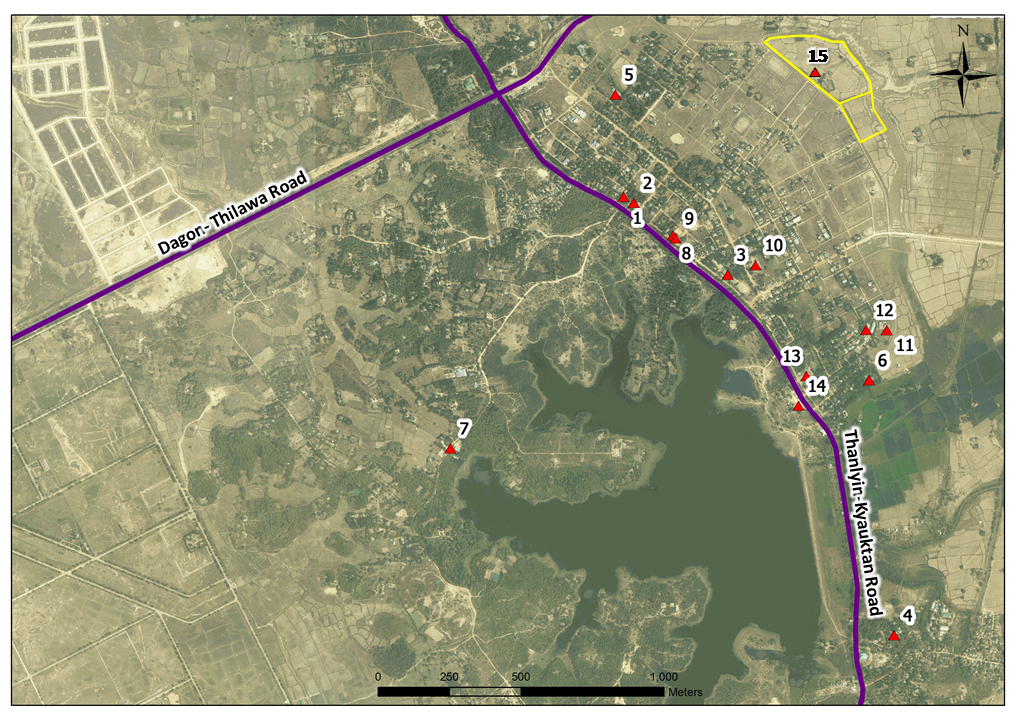