The Thilawa Special Economic Zone Complaints Management Procedure (TCMP) supports stakeholders to raise questions or concerns with the Thilawa Special Economic Zone (TSEZ) and have them addressed in a prompt and respectful manner. The TSEZ aims to address all complaints received, regardless of whether they stem from real or perceived issues. Any stakeholder who considers themselves affected by the TSEZ’s activities will have access to this mechanism at no cost.

Thilawa SEZ seeks to foster trust in the process and its outcomes. To this end it will communicate this TCMP in an understandable manner to affected stakeholder groups. Confidentiality will be respected and the TSEZ will take all reasonable steps to protect parties to the process from retaliation.

This TCMP aligns with existing TSMC and MJTD directives and initiatives regarding responsible business, as follows:

TCMP does not replace existing Myanmar legal processes, or Thilawa SEZ administrative processes already in use. In addition, it does not impede access to other judicial or administrative remedies that might be available through domestic law or through existing arbitration procedures.

The system and operational issues of TCMP has been reviewed periodically since the launch in November 2017 and the result of review work published in 2018 is summarized in following web page.

Practice and Review of TCMP

1. Process to Deal With Complaint Management

The procedure of complaint management has 6 steps as follows. 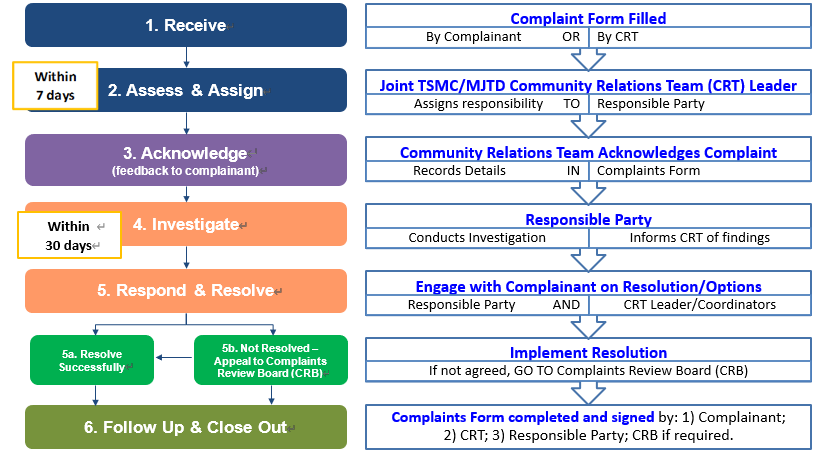 Once Community Relation Team (CRT) receives complaints, CRT acknowledges to a complainant for receiving a complaint within 7 days after receiving.

CRT then assigns a responsible party based on the type of complaints.

The responsible party investigates the complaint and a complainant can be involved in throughout investigation process.

CRT plays an important role in TCMP as a joint team of TSMC/MJTD and the composition is as per below. CRT has role as (1) internal Thilawa SEZ coordination team, (2) internal and external ‘face’ of TCMP and (3) administrator of the TCMP. Following staff are assigned as CRT member.

Channels For Raising a Complaint

There are several “channels” that can be used by community members to raise or file a complaint with the Thilawa SEZ. These include, but are not limited to:

The application format of Complaint Management Form is installed in respective places. The flyer of TCMP and Complaint Management Form has been placed in the village tract and ward general administration offices in project affected communities (PACs) as well as the relocation sites of Zone A and Zone B since November 2017. The sample format of application is as shown below.

For the full documents of the format, please download here

The TCMP is managed by collaboration of TSMC and MJTD. The Contact persons are shown in the figure below.